The Golden Triangle of Health Care

I am a big fan of inspirational quotes.  I even have a few of my own; some of them are even original.  One of them (and I don't think I invented it) is:

"If money can solve it, it's not a problem."

[My Mom has a great variation that she swears that I did create:  "If there is a solution, then it's not a problem."  I think she just misquoted me.  But I like her version better than mine.  So, I'll claim ownership.]

In the health care system, a lot of people and a lot of companies are spending a lot of money to solve its problems. It's not working.

Why?  It's the "Golden Triangle".  It looks like this: 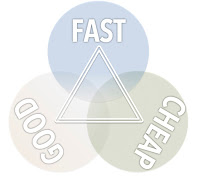 Simply put, the Golden Triangle consists of three options:  Good, Fast, and Cheap.  You get to pick any two.  It often refers to the world of design.  But it can be applied to practically any service being rendered ranging from car repair to restaurants.  Of course, it's not unusual to want all three corners of this triangle. Sometimes you can actually get it.  Usually, not.  More often you get what you paid for.

The major difference between applying the Golden Triangle to health care as opposed to graphic design is that  picking only two corners can end up with undesirable, and sometimes, deadly results.  Fast and inexpensive care would certainly not substitute for getting proper treatment. Nor would excellent care that you could afford but had to wait weeks to receive it.    And yet, when we are sick, we want to receive quality care in a reasonable amount of time and not worry about losing one's savings (or worse) in the process.  These are not unreasonable expectations in my opinion.

Most of the time, patients are more concerned with good and fast.  That is, work on the health issue as quickly and as effectively as possible. Inevitably, that leads to sticker shock when the bill arrives.

Unfortunately, too often, we are only getting one corner of this triangle.  And sometimes, patients get none of the corners.  The latter is often true for challenged populations such as uninsured and low-income patients.

If you were only allowed two corners of the Golden Triangle for your health care, which ones would you choose?  This certainly will vary from person to person.  And that's why it has been so difficult to make systemic improvements in the health care system.

Can we solve all three issues at once?  Perhaps not.  So, which corner(s) would you address?  And how would you justify ignoring the other corner(s)?  This is a very difficult decision which providers are wrestling with every day.

A Sincere Apology (A 5-Step Guide)

Nothing rings quite as hollow as an insincere apology. We hear them all the time in politics and the corporate world. They usually sound like: “I’m sorry if you were offended…” or “If my actions cause

What If Your Hotel Bill Was Like A Hospital Bill

Deciphering your hospital bill - Good luck with that!

David Lazarus, a consumer rights columnist for the LA Times, just wrote an excellent article about hospital bills and how complicated they are.  In light of my recent post about this very same subject